I guess with any hobby you’ll find that if you do your research, you’ll get a thousand different answers to any question.  After reading a few alfabb.com forum threads, a new owner can get really confused about what is fact and what is questionable opinion.  Information overload and some of us stress over wether or not we’re doing what we set out to do the right way.  More research!

I never did find a simple list of parts to do an oil change on a US model 1974 Alfa Romeo 2000 Spider Veloce… maybe this will help some other new owner one day.

The Redline break-in oil is an additional Zinc additive to prevent cams of softer metals from flattening out so quickly (some say it’s not necessary, but why not?)

Don’t over tighten the sump plug or spin on engine oil filter.  Both of mine were so tight it was a four hour battle to get them off.  They just need to be snug to make a good seal.  The sump plug head is so shallow the socket kept coming off and slightly rounded the corners.  The plug was so tight I had to buy a breaker bar.  The oil filter was so tight I had to look online for advice and found a trick when all else fails.  I had to drive large screwdrivers through the filter canister body and keep inching it around until it finally let loose.  One thing the forums didn’t mention though is that you don’t want to damage the threads from the filter connector that’s part of the engine cooling system!  Don’t drive the screwdrivers through too far down toward the base of the filter canister body (where it connects to the engine).  Stay middle to top.  I damaged my threads but fortunately not enough to prevent me from getting a filter screwed on.

You don’t need to use a tool to tighten the filter.  Just hand tight and you can feel when it reaches the rubber seal… half a turn past or so and you’re plenty tight.  Don’t forget to smear a little fresh oil around the seal first.

I couldn’t find a copper washer so I learned to anneal the copper (an old blacksmithing technique to soften metal). Google it… heat up the washer with a blow-torch glowing red hot then quench it in water.  Makes the copper soft enough again to make a good seal. 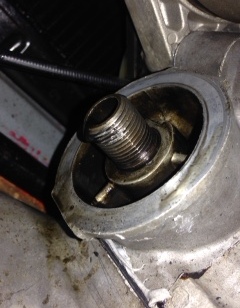